Today I bit into my first perfect peach of summer.

It’s a little late, I know, and now I’m regretting not stuffing my mouth with them for the past 3 weeks.

I mean come on Michele, you live less than a mile from Peach Tree Road…..

Each year I experience the same moment: biting into a soft, still-warm-from-the-sun peach that twists apart into two perfect halves in my hands, sunset colored flesh that breaks between my teeth with ease, not mushy but not too firm, and tasting of pure summer. And once again I remember why this is my most favorite of fruits. Silly of me to ever forget. 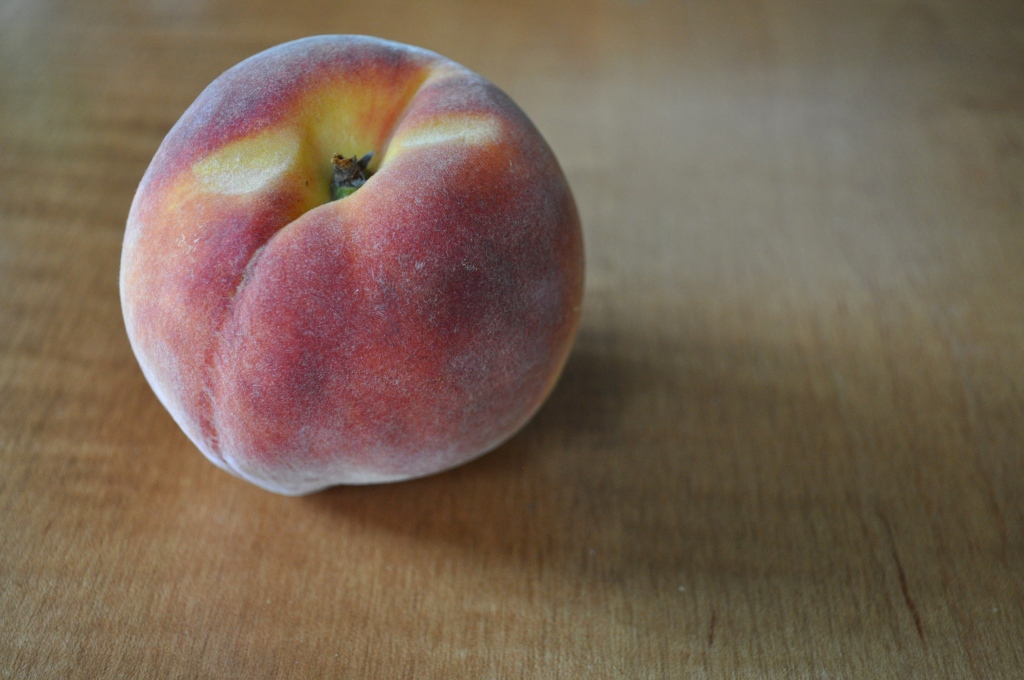 So a couple weeks ago we celebrated my summer birthday with a delicious home-cooked meal on the patio, featuring rosemary-lemon roasted chicken, fried plantains with sweet chili-cilantro sauce, citrusy jicama slaw, lots of sunshine, and great company. And I decided to make my own birthday cake :)

My idea was for a gingery peach cheesecake, to use up some of our not-quite-yet-perfect summer peaches. However I couldn’t find a recipe I was satisfied with, and out of all the cakes, pies, cobblers and whatnot my mom and sister have made over the years, neither had ever made a cheesecake. So I plunged into the unknown, using my imagination and a couple different recipes for estimates. And what do you know, it was one of those lucky days.

I would expect no less on my birthday, of course ;)

From the oven emerged a naturally sweet, nutty, and gingery crust surrounding a light and creamy filling, flavored with vanilla and fresh ginger. The early summer peaches which topped it off were slightly less-than-perfect, but the cake didn’t seem to mind.

I get pretty excited when I luck out like this with a made-up recipe. Because it doesn’t happen often. Soo, I’m sharing it with the world in hopes that you’ll try it, or at least go take FULL advantage of summer’s sweetest fruit.

Preheat oven to 325.  For the crust, process pecans in the food processor until coarsely chopped.  Add cookie crumbs and pulse until mixture is fine. In a small bowl, whisk egg white until frothy.  Add dates, almond meal, egg white, fresh ginger, cinnamon, oil and pulse until completely combined. If mixture is not holding together, add 1-2 Tbsp soy milk. Remove mixture from food processor (it should stick together like a big ball of dough), and  press into the bottom and up the sides of a round 9-inch glass baking dish. Set aside while you prepare filling.

For the filling, beat together softened cream cheese, yogurt, sugar, and agave in a bowl with an electric mixer until combined and creamy. Add vanilla, minced ginger, egg + egg white and beat until combined. Lastly beat in the flour and then pour into the crust shell, smoothing it out to the edges with the back of a spoon. Bake the cheesecake until set, about 50 minutes, then transfer to a wire rack to cool for 1 hour. Cover with plastic wrap and refrigerate for at least 2 hours before serving.

While cake is baking or cooling, slice up peaches and add to a bowl with agave. Mix in some cinnamon if you like. Let sit covered in the refrigerator until ready to serve the cheesecake.

Just before serving either top the cake with your sliced peaches, or leave them in a bowl for each lucky taste tester to plop atop their slice of summer.

ps–  I may or may not have reasoned this was healthy enough to eat for breakfast the next morning. But really—yogurt, nuts, peaches—it beats a cinnamon roll by a mile :)

6 thoughts on “peaches and ginger cheesecake”